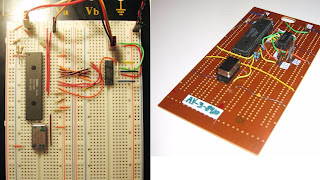 One of the last oscillator code bits I need to do is to replicate the Envelope buzzer (and Sync Buzzer) techniques used on those chips.

So again, like with all facets of this project, i just HAD to get my hands dirty!
I used a bread board to experiment (left), and then made a protoboard(right) that proves a bit less flaky than the original. (and well i needed my breadboards for some other stuff)

All my boards now follow a simple setup where I can talk to any 8 bit chips using a serial line (74hc595) and a few chip select lines. I can use either the an Atmel/Arduino/MIDIBoxCore as an interface between the 8bit chip and the PC running Bidule.

It goes without saying that also made a special MIDI encoding for every chip I have on external boards, so that microcontroller code modifications to drive each new chip was minimal (there are limits to my masochistic tendencies)

In short: I can - direct in Bidule- just "type in" the register changes that i need for the chip and then feed the audio back in bidule for analysis and recording... many GB worth of that in fact.

I can also, directly in C++, code MIDI to "Chip register language" transforms to actually get some live musical results out of them.

More boards and pictures soon... Maybe my 1U RACK'ed NES is next :)