May 24, 2009
There are various NTSC 2600 RCA A/V mods out there. Four years ago (note WAAAAAY before I thought of making chipsounds) there were a only a few that I didn't really like since either the mod was mono, or stereo but with huge L+R bleed that didn't really cut it for me.

Four years ago, I also had about zero electronics knowledge, so I hacked the most horrible thing which you can see here: 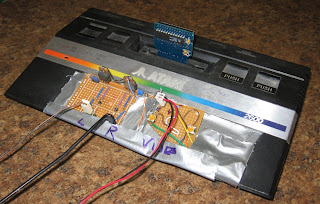 Instead of feeding the same voltage source to both channels, like in that schematic, I modded it by added TWO 7805's onto an external duck-taped protoboard onto the console itself.
Each of them "feeding" DC component into one of the two TIA audio outputs.
As always I try to bypass AC coupled electrolytic caps - however dangerous this is - to tap in closer to the original signal as possible (in hindsight I should have buffered the signals as well with an opamp).
However ugly it is, it works perfectly for my own taste.

Whats cool about stereo mods? Well to completely isolate effects used by programmers, remember that two channels is not much.

Notice the TOTAL absence of Background noise. (mp3 encoding did the worst)

Note#2: The Atari Cartridge PCB is from Pixels Past. Build to use 27128 EPROMS (see previous). So fun code can be easily ran and recorded. Dont worry I do have original game carts for Pacman and ET . Like who doesnt.