The weight in gold of obsolescence

May 09, 2009
Gold price is currently 900 USD an ounce. It is one of the only safe investing bets for the current economy... However that's bad news for you and me.

Last Friday I took off early and indulged in some long overdue electronic junk treasure hunt. Visited two of my best spots in Montreal pcrecycle and 1800parts.

Whats funny in fact is that I was looking for a device I had myself thrown away 10 years ago. The original Sound Blaster 1.0. Who would have thought that I would now need an obscure chip from this board .. not talking about the YM3812 (OPL2) – but a SAA 1099 which would have been, I think very easy to add to chipsounds, especially when i could just compile a little C program in borland DOS compiler and make it scream from its ISA slot in my 486 for my now routine steps of noise pattern and bit mixing analysis.

Only two years ago I remember that place had a HUGE box of ISA audiocards, filled with valuable chiptune goodies on them (got about 15 boards with OPL3 chips on them, inducing the pretty rare Adlib Gold, and (even rarer) a Microsoft Windows SOUNDSYSTEM ... wait did you see that properly? Microsoft branded SOUND CARD!!! 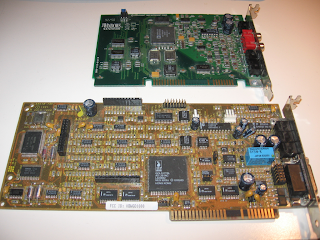 The later shop owner gave me a odd look, and said -off the bat-, all that went to Germany a while ago (according to him the current biggest player in large-scale computer recycling) Why do we keep hearing about China all the time?... media fascination I guess.

I also Keep Wondering whether or not my obsession with “old junk” is (even remotely) an eco-statement, or if its just retarded geeky nostalgia. Whatever I buy will end up in recycling anyway.

So I have a look around, try to listen to all his stuff about bad customers and the provincial difference in police behavior in a merchant/client dispute.... I just kept obsessing about the damn cards.

Two stories higher (guy has LOADS of server/printer stuff)
found a container headed for recycling, which I spent 30 minutes digging through.
A bunch of them, mostly crappy Vibra 16 Sound Blasters, but nothing as old as an 8bit SB 1.0 card. However, here's what I scored:

Just couldn't resist its beauty. Also a Gravis GF1 chip is hard to come by, and may become handy in say chipsounds 5.0 ;)

But now with all the children suffering in this sad world, why do I imagine all those SID chips melting in Aqua Regia????

(anyone with a SB1.0 card that wants a free chipsounds license just send me a shout)
EDIT: I just won a rare CT1350A Stuffed with two SAA chips!