October 28, 2009
Well I've talked about this before, but I'll say it again.
Designing a synthesizer that claims full chip authenticity and playability at the same time is the toughest challenge I'm faced with.

It hard to give access to powerful sound tweaking possibilities available on some chips when the synth paradigm you are basing your whole design on is of the standard
[voice0 + voice1 + voice2 + (...) + voiceN = mix]
variety

Look at this signal path for instance: 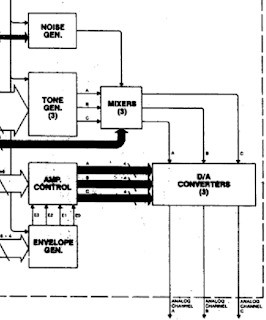 It becomes clear that something like this doesn't fit that particular mold.

The AY has five generators: 3 tones, 1 noise, and 1 envelope.
It also has three independent audio output pins, that are mixed in the analog world differently in all the AY-based systems.

Now each of the output has its own tone generator, but it can also be mixed with the lone noise pattern (either, or combined with a binary AND). On top of that each output can have its volume changed independently (16 log steps), or be amp-modulated by the LONE Envelope generator. (more in the spec)

Anyone who's messed with an AY knows that the fun comes from mixing the env/tone+noise in certain ways which can make unique drones/beats that any IDM/Experimental student would enjoy.

But you can't currently do these in chipsounds v1.0 due to voice paradigm its based on. From recent user questions on the AY matter, it surprised me how programming a straight chip emu sounds like a hard task.
But in reality, in comparison to trying to make it fit in ARIA/SFZ, making a separate module that purely emulates the chip in bit perfect manner (and with all its limitations) is really not the challenge it appears to be.

The AY is a relatively simple digital state machine

Here is a snapshot of my current prototype (made using Bidule's C++ SDK): 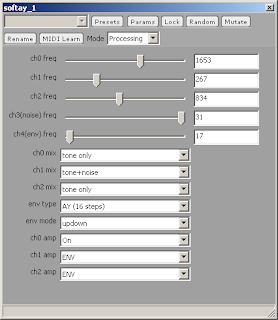 And the type of drones you can dynamically make by moving the sliders here:
Example A
Example B

Its currently unclear if/how this will be integrated in chipsounds, or given for free for Bidule users. Please stay tuned!