For chipsounds 1.0, I got the help of eslapion from the Denial forum to analyze the RC filter output of the VIC-20. Eslapion got me to learn how to understand the link between the resistors and capacitors and how to extract the exact low pass filter coefficients that was needed to implement in DSP. It simply turns out to be a 1.6Khz one pole low pass filter. (third party confirmation here).

Such a low cutoff makes for one REALLY DULL sounding chip

But that's not the only sound coloration present on the real VIC. There is also quite a bit of clipping going on when all voices play at once. This clipping does add quite a bit of character when there are a combination of more than one pulse voices playing, as well as the noise channel.

Lets look at the phenomenon on a scope:

"The specs sheet of the 6560 specifies the audio pin has an output impedance of 1kOhms. This impedance interacts with C9 (0.01uF) to create a 1st order low pass filter of 15.9kHz.

In other words, these two filters combine to provide a 20dB/decade attenuation from 1.6kHz to 16Khz and then 40 dB/decade above that.

Q1 acts as a current multiplier to ensure enough driving power on the final output but, as we can see, R27 acts as a pull down only device and there is no biasing. The output of the 6560, multiplied by Q1 pulls up and R27 pulls down.

Add to that, the fact that the volume control induces a DC offset.

This DC offset, on the final output, is cancelled out by C11 which combines with R27 to create a high pass filter of 339Hz with 20dB/decade attenuation. Therefore, when no sound is playing there is no way to tell on the output that a DC level forms on the base input of Q1 as the volume is increased.

If the 6560 is going to pull up in DC when the volume rises then the maximum excursion of a sound wave is limited by a combination of the pull down current (set by R27) as well as the voltage feed which, in this specific case is 0 to 5volts. When the volume goes above a certain level, clipping of the positive side of the wave occurs as the 6560 attempts to pull up above 5V.

This clipping effect is even more intense when playing multiple voices simultaneously as their combined excursion adds to each other.

Obviously, the smallest amount of clipping occurs when the DC offset provides a DC level of 2.5V on the base of Q1. This is achieved when setting the volume level to 8. 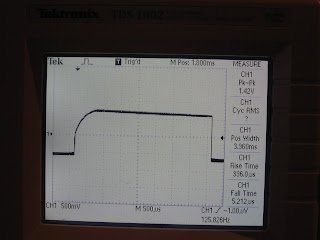 Now, looking at the rise and fall time of the signal taken directly at pin 19 of the 6560, we see that the rise time is much greater than the fall time. Considering the effect of Q1, as seen by the 6560, R27 should appear as about 100 times greater.

This asymetrical voltage change is caused by the diode in the base of Q1 which can draw current on voltage rise but not give back any on the falling edge. This causes C9 and C10 to charge slowly as Q1 "steals" current used to charge these capacitors but not restore it when the 6560 discharges them. This assymetrical time constant is less dramatic on the actual output as C10 and C11 are still discharging at the very instant C9 appears to be empty."


Heres an audio capture form the final analog output of the VIC-20 CR:

So there you have it!

The VIC emulation im working on for 2.0 includes that clipping and filtering and is starting to sound very close to the real thing.... stay tuned