Lamer Exterminator, or how a 22 year old malware can still piss you off.

February 19, 2011
As usual I need to step back for my obligatory back story.

Didn't see the word Amiga there? Normal, only very rich kids had them where I came from. Only relatively recently did I start to indulge in that world, and what a 'fun' ride this still is. Amiga literate people can stop reading now, or continue and have a laugh at my expense...

Broadening my quest on early digital sound chips, a look at Paula (MOS8364) was inevitable, although as an 8bit DMA sample playback device, it didn't really fit the original intent of chipsounds. (no oscillators, classic samples are copyrighted, etc).

Nevertheless there are a bunch of things I plan to do following my current OCS Amiga research but I'll keep this for a series of future articles...
... So I got a bunch of gear and disks from various places. 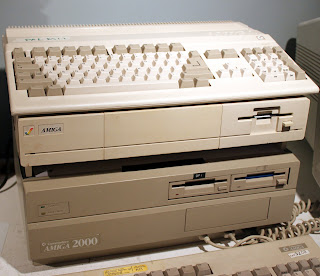 1)Top is my ebay.co.uk bought PAL A500, which I recently upgraded and tweaked (more in a future article).
2)Middle is an Original NTSC Amiga (later re dubbed A1000), a loaner from XC3N which wasn't his in the 80's.
3)Bottom one is my most important Amiga and the first one I found in a recycling center for 20$ a few years ago: an NTSC B2000 (rev6.2a) with 1MB of chip and 2MB of 'fast/slow' ram, and a 'A2320 Display Enhancer' VGA card . This was originally a Video Toaster machine but that particular addon was already removed when I acquired it.  The most important feature of that particular Amiga for me is its generous amount of ram, since this allows transferring PC<->AMIGA floppy images transfers much easily (maybe the subject of a THIRD Amiga article)
I of course also have a weird collection of disks, some that have been recently transferred from the net, but most others are from the 'era' itself, including.... various bootlegged copies of Workbench.

Working on a complex platform that you are not familiar with is daunting for many people, but it is much more so when you get this horrible feeling that everything is flaky and unreliable. Machines that reboots randomly, Disk errors which suddenly appear on what were perfectly good disks just the day before. Since I dealt with 80s technology I just figured this was due to its age and condition... 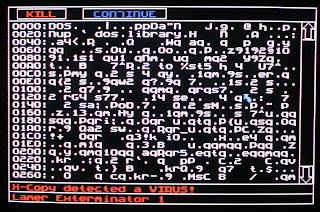 Only this virus was made 22 years ago and it made me lose PRECIOUS RESEARCH TIME THIS YEAR, since I only figured out what was happening the day I downloaded X-Copy because of its advanced disk checking features .. or so I've read... but as I found out it also scans the boot sectors of each disks for known viruses.

This virus is apparently quite famous for Amiga people, it even has its own wikipedia page. In any case, I was quite happy to wipe all infected disks clean and redoing much of my workbench, utilities, and test disks. Yes you can laugh, but I don't recall ever getting a C64 virus in my day, so I laugh back.. boot disks .... Pffft shush...

And ... That A1000 loaner I got a month ago also came with a bunch of surprises of itself:

Yes XC3N, I've quarantined those for you for when you want to get it back.  :) Don't worry, those last ones didn't make me lose any data, I had learned my lesson by then.

Conclusion: I hate script kiddies, present and past.