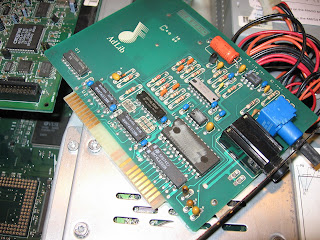 (see third capacitor from bottom) ...  I hate that smell.

Tantalum capacitors are under some conditions prone to self-destruction by thermal runaway. The capacitor typically consists of a sintered tantalum sponge acting as the anode, a manganese dioxide cathode, and a dielectric layer of tantalum pentoxide created on the tantalum sponge surface by anodizing. The tantalum oxide layer may have weak spots that undergo dielectric breakdown during a voltage spike. The tantalum then comes to direct contact with manganese dioxide and the leakage current causes a local heating; a chemical reaction then produces manganese(III) oxide and regenerates (self-heals) the tantalum oxide layer.
However, if the energy dissipated at the failure point is high enough, a self-sustaining exothermic reaction may occur, similar to the thermite reaction, with tantalum as fuel and manganese dioxide as oxidizer. This can destroy the capacitor and occasionally produces smoke and possibly flame.[3] To prevent catastrophic thermal runaway failure, auxiliary protective devices (e.g. thermal fuses, circuit breakers) may be used to limit fault currents"


Oh the joy, guess ill have to replace them and retry .. with the windows fully opened... no lets make it OUTSIDE!