33 years ago a game caught the eyes (and ears) of many people in Japan, and later everywhere else. You can read the whole story here of course, but this is not the subject of this post.

This post is about a little experiment I made in fixing and converting an original Midway Space Invaders motherboard to run in with JAMMA harness or standalone machine.

-The coin input, and controls are all mapped.

-The video is now RGBS (same signal send to R, G and B, and sync tapped from somewhere else.


-The only thing that doesn't follow the JAMMA spec is the audio output, since my mod requires a separate amp (like many other games like all Nintendo stuff and Mr.DO), so its obvious that any collector has those already. The SI daughterboard requires raw 18V+center tap directly from the transformer which I don't have (using a standard PC psu here) 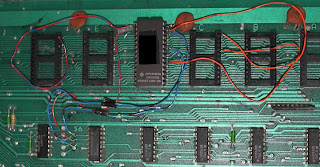