September 11, 2014
Is a Nintendo Entertainment System "homebrew" application that I've developed in order to improve the emulation of the RP2A03 for chipsounds 2.0, which is currently in development.

It allows you to change the values of the APU's memory mapped registers ($4000 to $4017) using nothing but the Nintendo d-pad.

A side effect is that it can also be used to generate live minimalistic 'music' on a NES by manually toggling a bit at a time, which is of course completely unintuitive!

Changing the pitch value for a specific channel on a musical scale implies changing multiple bits at once, something that is clearly impossible here.

As I like a challenge, I tried to see if I could make something remotely musical out of this incredible restriction set. The following piece was recorded live (not sequenced in any way) on a real NTSC NES:

Note:
A)The main DMC 'sample' that starts the piece is actually the application code and graphics being interpreted as Delta Modulation.
B)My NES is stereo mod-ed, so there is a slight touch of post mix and reverb, but that's it.

If you want to try it our for yourself you can download the latest .nes ROM here

Revision history:
1.2 Added VRC6 and FDS and now open source https://github.com/plgDavid/livenes
1.1 Fixed the wrap around on the lower part of the screen
1.0 Initial version

How can you run this on a real NES and not just in an emulator?

1)Put it on a Powerpak
2)Make yourself a nice UNROM (Mapper 2) dev cartridge out of one of those carts
(mirroring is irrelevant). I won't get into the details of that, but here's what mine now looks like: 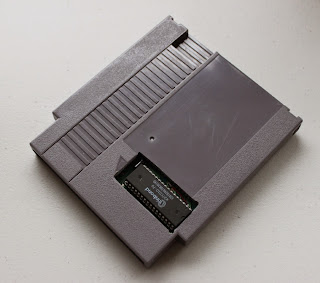